Summertime, and the Lending Standards are Easing

After the sharp tightening of lending standards across all categories in the first half of 2020, the banking sector retreated in the corresponding 2021 period in universally easing standards.

The Federal Reserve (Fed) released the results of its July 2021 Senior Loan Officer Opinion Survey on Bank Lending Practices on August 2nd. The Fed received responses from 75 domestic banks and 22 foreign bank branches, with the results generally corresponding to conditions in the second quarter of 2021. In an 18+ month period in which it was virtually impossible to overuse the term “unprecedented” when speaking about any subject related to the banking sector, the most recent results stand out. After the sharp tightening of lending standards across all categories in the first half of 2020, the banking sector retreated in the corresponding 2021 period in universally easing standards. 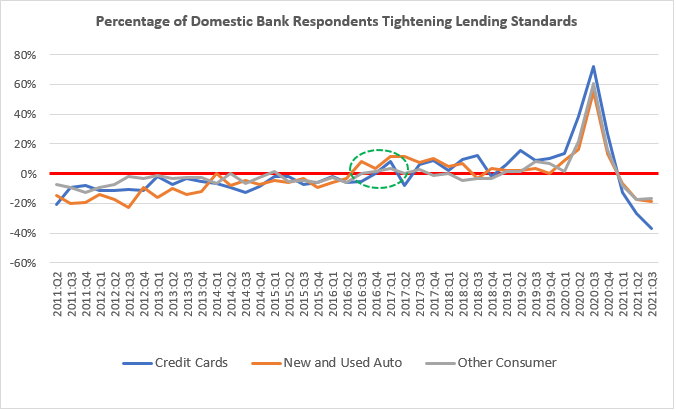 Tightening of lending standards last year was not surprising given the uncertainties that abounded following the COVID-19 pandemic outbreak as local economies shut down. What was “unprecedented” was the sense of urgency demonstrated by the sector as it moved to limit damage to its balance sheet. The chart above illustrates loan easing and tightening cycles of consumer loan categories since the first quarter of 2011 when the Fed first began reporting the individual categories. In basic terms, when the plot lines are below the 0% (red) axis, banks are easing lending standards and tightening standards when the lines cross above it. The longer the plot lines remain above or below the 0% axis, the tighter or looser lending standards become. Tightening or loosening cycles are commonly incremental and unfold over extended periods.

The circled area in the chart marks an inflection point in a more normalized environment, where after several years characterized by easing to stable lending standards, the sector began to assume a more conservative posture toward extending credit. Broadly tighter standards persisted until the first quarter of 2020 with the pandemic outbreak, when the system banks moved simultaneously to bolt down lending standards by the end of the third quarter of 2020.

Positively, the restriction of credit did not have a material effect on economic performance, as it corresponded with exceptionally low levels of loan demand with both businesses and consumers hoarding cash and broadly de-levering their respective balance sheets. Even those banks willing to make loans were finding very few takers on the other side of the table.

More constructive was the asset quality deterioration the system was moving to ameliorate never materialized as Federal stimulus programs provided a bridge for displaced workers to continue servicing their debt. The following chart illustrates loan loss rates across all consumer lending categories over the last four decades. It captures the last four periods of major economic disruption (circled red), with charge-offs driven by the Global Financial Crisis of 2008 – 2010 being obvious in its severity. Refreshingly contrary to expectations, loan loss rates have visibly declined since the pandemic outbreak, with the rate reported at the end of the fourth quarter of 2020 (1.50%) only 0.14% above the lowest rate reported over the last four decades. 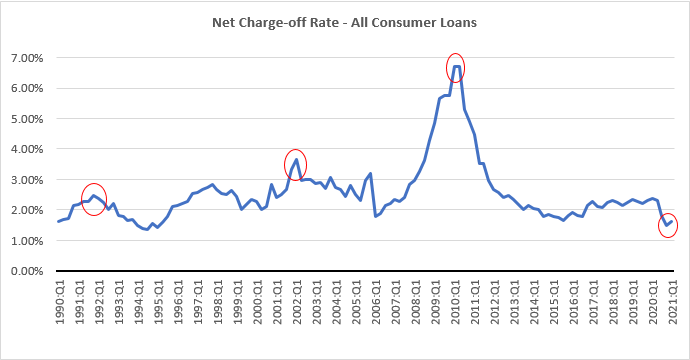 This resilience was a primary motivating factor for the systems shifting attitude toward lending standards, with the turn beginning in the first quarter of 2021 and accelerating into the second quarter. Easier lending standards occurring simultaneously with rising demand for credit and stable asset quality clear the way to support strong and sustained economic growth moving forward.

Board of Governors of the Federal Reserve System