What market conditions had a direct impact on the bond market this quarter?

Monetary Policy – The Fed lifted rates 25 bps at the March 16th meeting and indicated through their Dot Plot expectations for an additional 150 bps of tightening in 2022. Surging inflation numbers have increased both market expectations and Fed rhetoric for a more aggressive pace to rate hikes, with 50 bps increases at the May 3rd and June 15th meetings becoming the market’s base case. Further, the March 16th meeting minutes revealed plans to begin balance sheet reduction at a $95 billion ($60 billion in U.S. Treasuries and $35 billion in agency mortgage-backed securities) monthly pace, likely starting in May.

Fiscal Policy – After two years of unprecedented fiscal stimulus to counter the negative economic impact of COVID-19, government spending will likely be a drag on U.S. GDP in 2022. State and local governments are, for the most part, in excellent shape, flush with surging tax collections and still unspent federal pandemic relief funding. Given current inflation pressures and the difficulty in passing legislation during the 2022 election cycle, the probability of further fiscal stimulus measures is low.

Treasury yield curve levels surged as markets accelerated the pace and magnitude of Fed rate hikes with two- and three-year yields most impacted. The rise in 10-year yields was significant but less so than for shorter maturities, suggesting markets expect inflation levels to ease over the longer run.

Corporate and ABS credit spreads widened in the quarter, with most of the damage done in the first two months of the year. AAA-A spreads stabilized in the second half of March. The steep decline in BBB corporate spreads in March was primarily related to removing Russian-related bonds from the index at quarter-end.

*AAA-A Corporate index underperformed the Treasury index by 6.3 bps in the quarter.

U.S. Financials underperformed U.S. Non-Financials by 87.8 bps in the quarter.

Not surprisingly, Q1 investment performance was abysmal across all asset classes, given the jump in yields and wider credit spreads. Credit sectors underperformed comparable duration Treasuries, although the differential vs. AAA-A rated credits was relatively minor. BBB credit significantly underperformed their higher-rated counterparts, partially due to the presence of several Russian-related issuers in the BBB benchmarks. These issuers tend to be industrials rather than banks, which account for the majority of the performance dispersion between the non-financial and financial indexes.

What strategic moves were made and why?

Taxable Portfolios – U.S. Treasury yield curve levels spiked due to higher inflation data and the growing probability of more aggressive rate hikes from the Fed. As a result, quarterly fixed income returns were meaningfully negative in historic fashion, illustrated by the ICE BofA U.S. Treasury Index’s -3.162% Q1 return, the lowest quarterly return in more than 40 years. Credit spreads widened in the quarter as well, which resulted in underperformance for credit vs. comparable duration Treasuries. BBB credit underperformed A-rated counterparts, but a significant portion of the noise within BBB indexes was related to Russian-linked industrials which saw their spreads blow out before being removed from the indexes. The cheapening of credit was widespread and more related to global-macro events and imminent Fed tightening than any meaningful deterioration in the fundamental credit quality of our investment grade universe.

Tax Exempt and Tax-Efficient Portfolios – We added to traditional municipal allocations significantly for the first time in years. This activity was spurred by a dramatic increase in absolute and relative yields. Short municipal rates (1-3 year) soared by approximately 150 bps and municipal ratios relative to comparable Treasuries improved from around 35% to a much more reasonable range of 75-90%. Often times these sort of moves occur as a result of an elevated level of municipal supply. However, in this case, it was a massive reversal in municipal bond fund flows (more than $28 billion in outflows YTD) which proved to be the main catalyst. As investment opportunities priced in significant Fed tightening, we welcomed the higher levels as a way to add income to portfolios in a more immediate way. Given the high level of uncertainty around the Fed path, we were motivated to “average-in” these fixed-rate positions throughout the quarter. We also sought to purchase a range of maturities in a laddered structure from as short as a few months out to three years.

How are you planning on positioning portfolios going forward?

Taxable Portfolios – Higher Q2 yields continued the trend of creating or deepening portfolio unrealized gain positions. We encourage investors to focus on re-investment opportunities to increase book yield and portfolio income rather than unrealized losses, particularly if there is no need to sell these positions. With portfolios now marked to current higher yields, monthly and quarterly performance numbers will benefit from a larger cushion against further price deterioration should yields move higher. Going forward, we expect very short yields (less than six months) to rise dramatically as the Fed embarks on a more aggressive rate hike tempo. We expect two- to five-year yields will be biased higher in Q2, although the market has already priced in significant Fed tightening and further increases in the quarter will likely be more limited than seen in Q4/21 and Q1/22. As a result, we are positioning portfolios short of benchmark duration and focusing allocations to the front-end of the curve to reinvest as quickly as possible. Given our outlook for continued GDP growth, the resiliency of the U.S. consumer and solid company fundamentals, we remain constructive on corporate, bank and ABS sectors and view the cheapening of credit as an opportunity to add portfolio income. Financials remain an overweight vs. industrials given their higher yields, strong balance sheets and limited exposure to vexing supply chain issues. Yield curve volatility has provided more opportunities in the agency callable space as a high-quality investment alternative to Treasuries or bullet agencies.

Tax Exempt and Tax-Efficient Portfolios – We believe a mix of fixed-rate and variable-rate securities is a prudent approach to investing in this market environment. The ultimate path of Fed tightening remains highly uncertain in terms of both the pace and the terminal rate. Current allocations for municipal-only mandates are approximately 65/35, tilted towards variable-rate. There is plenty of room for fixed-rate exposure to continue to grow in the coming quarter and that is our plan and expectation. Tax-exempts have become a much more viable alternative to corporates in some maturities. Most notably, we like maturities inside of one year for tax-efficient accounts. Municipals are trading in this area at levels approaching, and in some cases, exceeding treasuries on a pre-tax basis. After-tax yields are competitive vs. corporates. We may look to avail ourselves of some of these opportunities in the coming months as a diversifier to increase credit quality and potentially add incremental yield. 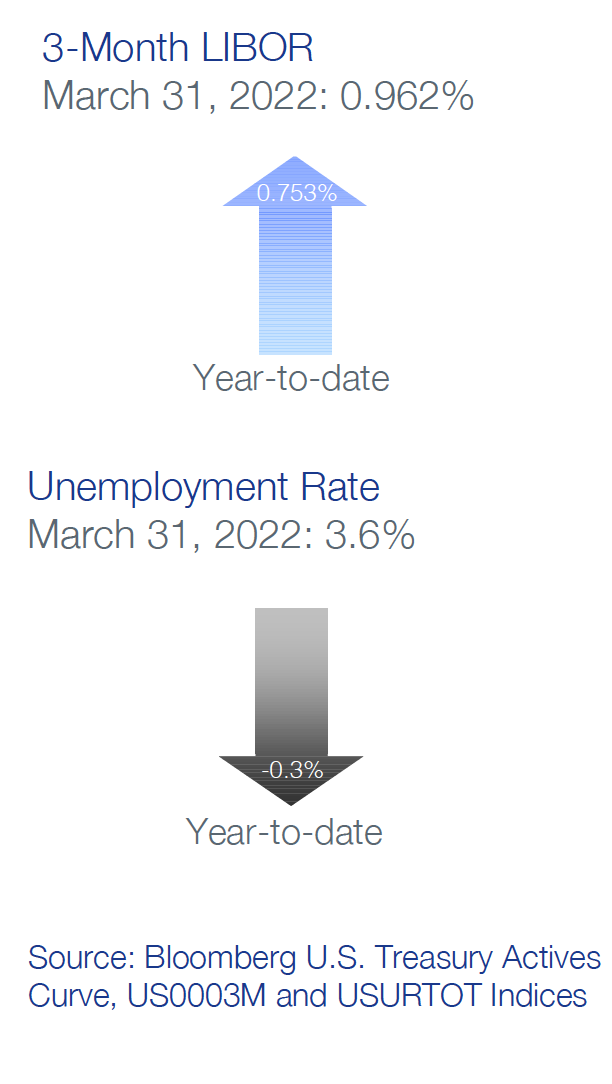